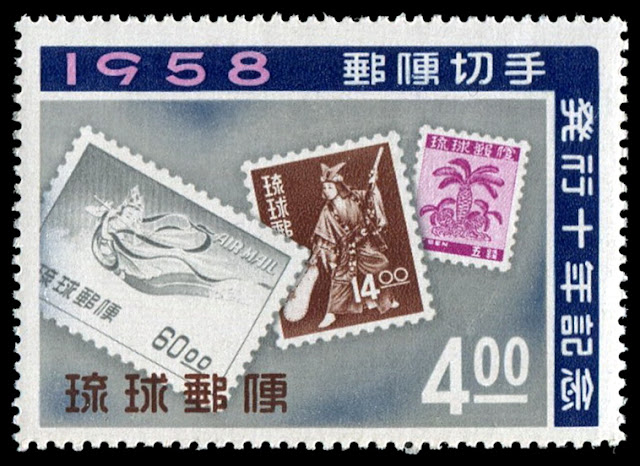 Three stamps shown on one stamp from a strange place with a strange name: Ryukyu Islands. But if you happen to be one of the 1,4 million inhabitants on this island chain, stretching from Japan to Taiwan, you would probably use the Japanese name: Nansei-shoto. Okinawa is the biggest island in the group. It was a ferocious battleground during World War II. After the war the islands came under U.S. administration, which lasted until 1972. The islands were then reverted to Japan. So Ryukyu stamps can only be found from 1948 up until 1972, when the use of regular mainland Japanese stamps took over. Most of the Ryukyu stamps during this post-war period looks like regular Japanese designs; quite pretty, often multi-colored, detailed and in good taste. They look like they have been designed and printed by the same workshops as the regular mainland Japan stamps.

The first official Ryukyu stamp (Scott #1) from 1948 was the magenta-colored 5 sen. It depicts a Cycad tree, probably a Cycas revoluta, or sago palm. There are two printings of the set it belongs to, one from 1948 and one from 1949. I'm not sure which year my scanned copy is from.

The brown 14 sen (#38 1956) comes from a set of kumi odori dance postures, a group dance built around a tale of romance and chivalry from Amawari's rebellion in 1458.

To further commemorate the Ryukyu issues, Japan issued this pair in 1998, marking the 50 year anniversary of the first Ryukyu issues. Accompanying the 5 sen magenta this time was the "final issue" from 1972, a 5c blue depicting an antique yushibin, a ceramic bottle from Okinawa.