On the podium: French Southern and Antarctic Territories #258 (1999)

Terres australes et antarctiques françaises, shortened TAAF, is a strange stamp-issuing entity. It consists of some scattered and disputed islands close to or south of Madagascar and some other islands close to the Antarctic, in addition to a slice of Antarctica itself (Adélie Land). Do they really need stamps on these godforsaken islands in remote, icy waters, largely unpopulated and with no post offices in sight? Maybe. Some 50-100 scientists and researchers have been living on different research stations within the TAAF area from the 1950's on. Still, there is no doubt that TAAF stamps are produced largely for collectors. And by issuing TAAF stamps regularly, France can point to a sort of official authority over these islands, always a good thing for a nation that wants to be a player on the world stage. The historical connections are indisputable; several of these islands were first discovered and mapped by French explorers in the 18th and the 19th century. But the dispute about land claims and ownership is not for this blog to decide. I found quite a lot of interesting info on TAAF here and here.

There are lots of beautiful and interesting stamps in the TAAF catalogue well worth collecting. Naturally, most of them look like they come from France. Usual motifs are scenes from the exploration and mapping of the islands - their history, their wildlife, their biodiversity. Birds, penguins, volcanoes, whales, sea lions and other forms of marine life is prevalent. They are popular among collectors. I have been tempted to start collecting TAAF stamps myself, but I find many of the engravings a bit too heavy-handed and industrial and the stamps are far too often too big. Then on to the SOS: 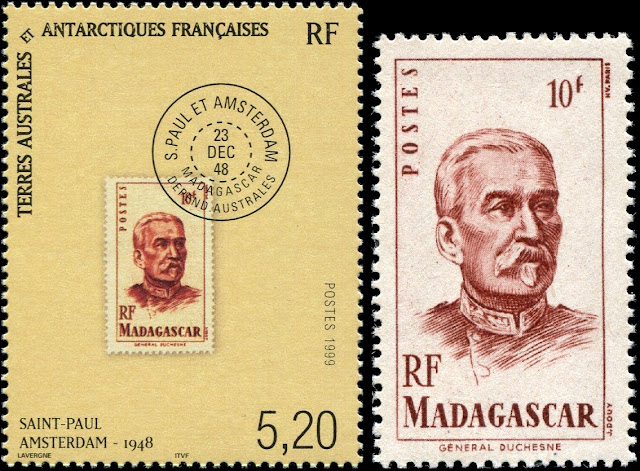 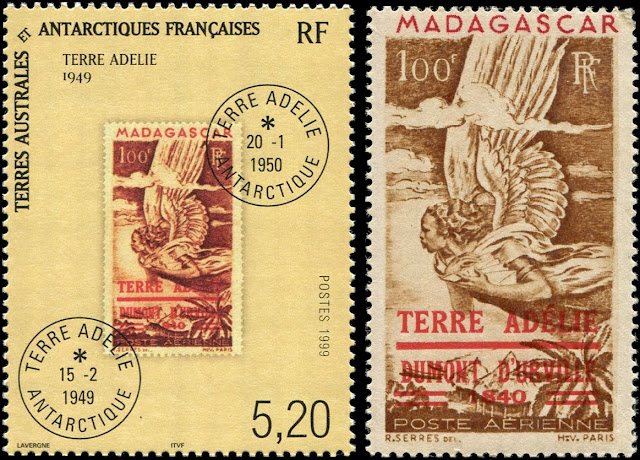 This TAAF SOS sheet set from 1999 gives us quite a lot of information without being overburdened or cluttered and cramped. I'm not at all sure that the conspicuous cancellation marks are real. They seem to send a clear message about ownership - a kind of "case closed" - you can almost hear the metal stamp handle push down on the paper with a loud "thump". But at least the old stamps are given enough space to become the center of attention.

The two Madagascar stamps (the orange and brown portraits) are from 1946 and come from a classic set engraved (or designed) by Jules Douy.  He was a painter and artist who also worked in advertising and as a poster designer. I have seen pretty accomplished paintings by him. He won several prizes for his engravings.

The Charcot stamp (Charcot was a famous Antarctic explorer) was done by Pierre Gandon (1899-1990). He is more famous than Douy. It is rumored that Gandon designed and/or engraved more than 1000 stamps for France and the French colonies. There is even an entry on him in Wikipedia.

The Madagascar overstamped "Terre Adélie - Dumont d'Urville 1840" is by Raoul Serres (1881-1971), another very productive French stamp designer and engraver. He also illustrated books (Flaubert's Trois contes for instance) and designed postcards. So with a little luck, you may one day find a Serres-designed postcard with a Serres-designed stamp on it! Here is a list of stamps by Serres. There is a short entry about Serres here.

And to round off: Dumont d'Urville (the name mentioned on the Adélie stamp) was a great French explorer who discovered Adélie Land in 1840 and named it after his wife. John Dunmore has written a book about him. 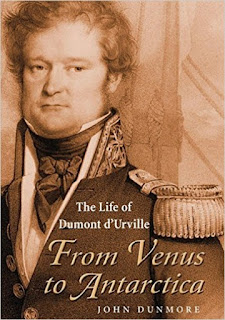