I suspect that the Malaysian stamp designers who found the old Kedah stamps for this set wanted to make it difficult for us SOS collectors to find copies of the stamps depicted. I haven't been able to discover any varieties with that particular dark green color as on the 1 cent stamp, and I can't find a 50c plower-and-oxen with that lilac/mauve frame color either. Not from 1912. They could be from the later 1920s reissues, but 1912 is the year of commemoration. The red-framed 5 dollar (showing the Council Chamber in Alor Star, Kedah's capital) is also impossible to find from the year 1912 on that yellow-toned paper. So I gave up finding exact examples. Instead I present my "incorrect" finds. The 1 dollar will have to substitute for the 5 dollar. Of course, it could be that the printers for the Malaysian stamp office failed to reproduce the colors properly, but the general high quality of the printing makes that rather unlikely. 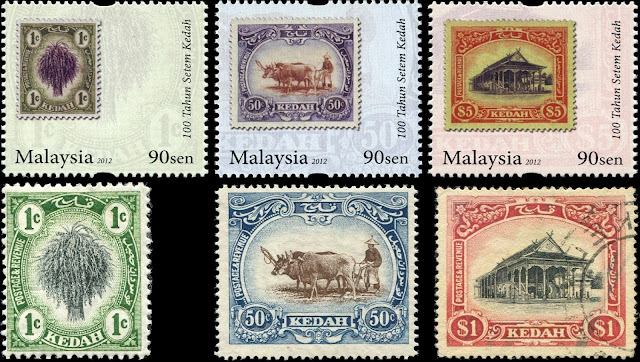 But what is much more important than the strange color shades: The stamps on these stamps exemplifies some features that make stamp collecting fascinating: A strange country of unknown location (Kedah), strange writing, strange letters, exotic locales and motifs, intricately engraved ornamental frames, pleasing color combinations - all in all, good handicraft way beyond what is necessary for a piece of paper that is just a receipt for postage paid.

Kedah was one of several minor sultanates on the Malayan peninsula that once was part of the British Malayan states. It doesn't exist anymore as a stamp-issuing country, but has become a part of Malaysia. The same is true of several other sultanates who also issued stamps: Perak, Selangor, Negri Sembilan, Pahang...

The mysterious fascination for these stamps would diminish if there still was a Kedah. Better to have the Kedah stamps as relics from a "lost land".